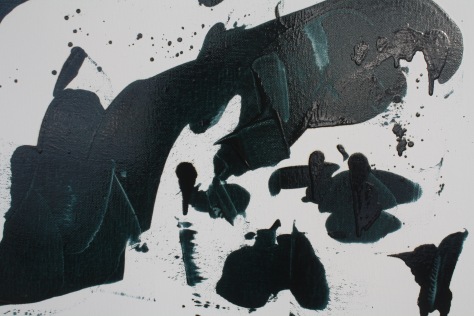 Is this art or not art? I can’t make the call. I’m letting the viewer decide and I’d like my blog to be a no b.s. zone. That means anyone can speak freely without worrying about hurting my feelings or getting into an argument with me. I won’t censor anyone either.

It’s untitled because I don’t want to influence your decision. If I titled it “nonrepresentational” the viewer would look at it as a pure design. I could give it a title that would make the viewer think of some social or political issue. Then I’d be putting some meaning into your mind and it would be abstract.

What if I had some subject in the back of my mind when I did this but I don’t tell you what that idea was? You could take it to mean something of importance to you. Then you should title it and we can call it abstract.

I could give it a funny or catchy title to make people like it but I won’t do that because when I was in art school they told us it’s a sign of a weak painting if the title makes a difference. The painting should speak for itself. If the painting doesn’t speak for itself it’s weak.

If anyone wants to critique it, I don’t care. My total lack of caring makes this kind of post modern. But really, blast it straight to h–l if you want to, or maybe you like it. To me it’s just another step out of thousands. I have no emotional attachment to it.

Did you ever hear an art viewer say, “That’s not art, my 8 year old could do it.” Then the artist or art expert says, “Yes but your 8 year old didn’t do this.”

Doesn’t that sound like a lame argument? What a weak defense of a painting.