This is a sketch I can use for a pastel on this nice rough sanded paper. I’ll go over it again later and even up my lines. That’s all freehand, no ruler either, so, it’s still a little rough, but an improvement over my first try.

To me architecture is as hard to draw as the figure.

I’m planning a nocturn. Tonight I’ll mark in the lights with chalk and pastel then make my sky dark. There’s too much light from the city to see stars but the moon was big and bright before sun up the past few days. I’m undecided if I should put the moon in the picture or not.

This is my first rough. I worked on it for a couple hours and stopped. At first I wanted to draw the whole bridge but when I got this far I could see it wasn’t working out. This rough helped me decide to start on the left so I could draw the narrow inlet where boats go through. I had these lines so I transferred this to the bigger better pastel paper and it was easier to draw the second time making corrections as I went. 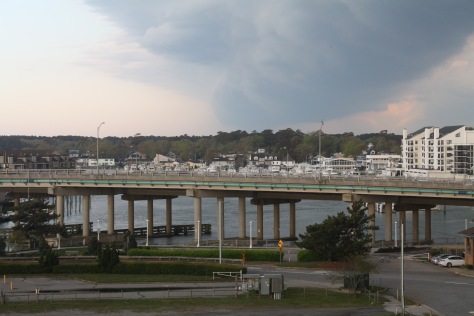 This is what it looks like to my camera during the daytime with clouds rolling in.

Tomorrow I can get the keys to my new apartment and put some thing in it. Then Sat some moving guys are coming to unload my mini storage and put my stuff in the new place. I don’t know if I’ll finish this pastel nocturn. I’m tempted to stay at this hotel until I do but on the other hand, I want to sew masks for nurses. As soon as I get my sewing machine plugged in I’m going to get with the mask sewers group and sew for the hospital for free. A lady told me Joanne Fabrics is donating the materials to the group. I think it would do me some good to make myself useful in the emergency.

Also, I bought a nice souvenir of my week at the oceanfront, a mermaid statue, on sale. She can hold a small potted plant. So she’s my model when I move away from the beach inland a few miles if the state park is closed and I have to pay to park at the beach.

I’ll miss walking on the beach. (sigh) I won’t be bored though.

I was sitting on top of the hill there at the War Memorial to work on this painting. It’s more comfortable to stand up at an easel, but I was in plain sight of 1000s of commuters on 2 busy roads. Also, people working in tall buildings could see me there in the sun on the hill. Sitting down makes me feel less obtrusive in the scene.

When I did my 1st charcoal sketch for this painting, I drew a pile of logs in the river, then later decided to eliminate them from the painting. But, in reality, the logs are there in the river providing a habitat for all kinds of wildlife.

You can see the Southside floodwall and the pilings from the old bridges that got destroyed. Plus the Manchester Bridge and railroad bridge.