This is what I have so far. I might work on the pot more and I might add more flowers. I’m not sure. I stood back farther from my sketch to take the picture than I did to sketch it so the ellipse on the pot isn’t the same as it is in my photo. And I leaned the starfish up against the pot so you could see it but I wasn’t planning on leaning it there for my final pastel drawing. I need to go to the store and buy peaches because I need a peach in this picture. I might take it out on my balcony to work on it later because the balcony has good sunlight before 10. The light in my apartment isn’t good.

This is the second time I tried to draw the pot. When I was in art school long ago drawing accurately was important. An unsymmetrical flower pot or unsymmetrical ellipses on the pot would be mocked in a critique. Like, how high were you when you drew that? if it was lopsided. 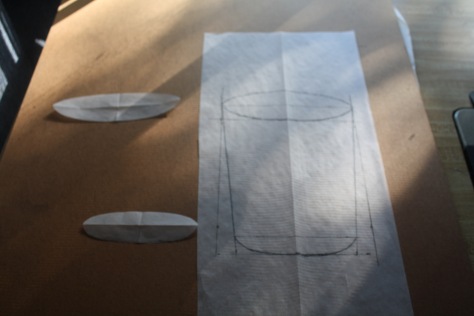 This is how I try to make my flower pot look right. First draw straight lines on tracing paper to the approximate proportions then fold it in half and check it. Fold tracing paper in forth and cut an ellipse, compare it to what you see in real life. If the ellipse isn’t right, try again.

This much work on the flower pot is enough to make some people call the drawing “labored over”. Labored over is bad in contemporary art. Which makes no sense to me. Is it really bad if you enjoy working on something difficult and finally get it right? Is it actually labor if you’re not getting paid but doing what you want to do just for fun?

The thing about contemporary art being so badly drawn is that they don’t like a drawing that isn’t sloppy. If I entered a juried show and the other flower paintings had unsymmetrical flower pots and messed up ellipses or totally absent ellipses, and mine was the only entry that showed some effort, mine would get rejected. If the juror is an art teacher that never learned to draw because their art school didn’t force it on them like mine did, and if that art teacher didn’t tell their students to try again to draw the pot better, then mine would be a kind of affront to them and they would resent my efforts.

If I called the juror and asked why my painting was rejected the juror would say, “I was making groupings and yours didn’t fit with the others”. This is why I say, the art world demands conformity. And why I say the jurors think like interior decorators.

I’m not making this up. This is one reason why I h8 the art world and will never pay another entry fee. I might go for free wall space some time in the future but maybe not.

Once I asked a juror who constantly rejected my paintings why and she told me the jurors are looking for “contemporary”. As if my being alive and doing art today isn’t enough to make me contemporary. I also have to lower my standards. They see my paintings as old fashioned. The joke’s on them though, because I’m not behind the times, I’m ahead of the times.  I can’t change the art world. It will happen anyway eventually but I’ll be dead. And my daughter will be able to sell my paintings for big bucks. She has a genius marketing plan that I can’t divulge.