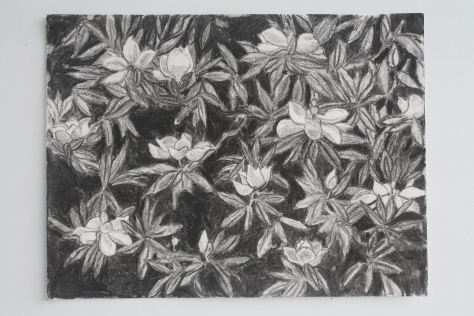 A story of a turtle and a dragonfly:

I was over at the botanical garden working on this study three different days in the morning before it rained each day. I was there about two hours at a time. So, roughly six hours in this little sketch.

The second day when I got there I saw a turtle on the ground in front of the bench I sat on to take a break the day before. It had dug a little trough in the wet dirt with it’s back feet and was half sitting in this little ditch it made. I wondered if it was going to lay eggs in the hole but I thought it wasn’t a very good spot for a nest right in front of the bench where they might get stepped on. I sat on the bench and the turtle didn’t move. I watched it for a few minutes to see if it would do something but it looked like it was asleep. I hoped no kids would find it and walked around the magnolia to a place I could sketch some flowers. When I got tired of sketching I went back to the bench and saw the turtle had walked about ten feet away. Then later I couldn’t see where it went.

Today I noticed a similar small excavation in the dirt close to the same bench. I wondered if it was made by that same turtle but I didn’t see it so I went to work on my sketch. I was working on it for an hour or so and a little blue dragonfly hovered over my sketchbook which I was holding in one hand to draw on. I couldn’t not see the dragonfly. Then it landed on the sleeve of my tie dye t shirt which is the same bright blue as the dragonfly. Nice little art nouveau ornament, I thought. It stayed on my sleeve for a few minutes and I continued to sketch. Later I looked and it was gone. I wondered why it landed on me.

I’d like to do a painting based on this sketch but it might have to wait until next year. I have more inspiration than time this year and the day lilies are opening up so I HAVE TO DRAW THEM!